We’re halfway through May now so I should’ve got this up about two weeks ago but whatevs, this blog writing thing is supposed to be a hobby. I’m sat in the sun in the garden writing this and it’s lovely. Got my two little bunnies in their run to my left and I love watching them being little cuties.

Anyway, I read one book in April and it was How to Stop Time by Matt Haig. I’ve followed Matt on Twitter for quite a while now after coming across him in various retweets about mental health. He’s pretty inspirational when it comes to talking and articulating his own mental health and about the struggles and stigma attached to it so if you have any interest at all in mental health, whether through your own personal mental health issues or through someone close to you, then I recommend following him. 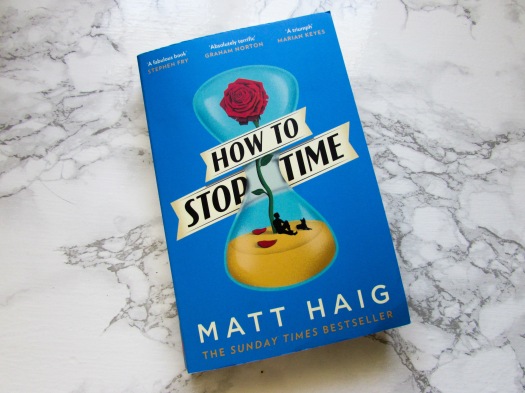 I also, as it happens, recommend reading this book! I read through this very quickly as it was engaging, engrossing and overall just very intriguing! The book is about a man called Tom Hazard and the unusual thing about him is that he has a condition that means he ages far slower than the general population. The book flits between various time periods of his life, from when he was a boy in the 1500s, (I think he was born in the 1500s… It’s been about a month since I finished this book so I can’t remember everything) to meeting Shakespeare, 1920’s Paris and the present day where he is just starting out as a history teacher at a secondary school. He’s seen a lot of things!

He joins a society that has been formed to keep people with the same condition secret and protected but the society is not all it’s cracked up to be… Tom also has a long lost daughter who has the condition so he is trying to find her.

Admittedly, at times the novel is a bit corny but that never put me off as I liked the messages within it and I genuinely wanted to know how Tom’s story would pan out. I won’t go into any more detail as to be honest, I’m not in the mood to write a super in depth review of everything about this book. The bottom line is I really enjoyed it and that was reflected by how quickly I finished it and how much I looked forward to getting the time to read it.

My laptop is also freaking out because of the heat; well, I’m assuming it’s because of the heat from the sun. I’m literally having to watch my words appear two minutes later as it can’t keep up. It’s like watching my mum write a text message. Worse actually.

I’ve now moved to the shade, begrudgingly, so I hope it will sort itself out. I want to be outside writing some posts! A robin just landed 2 metres away, I won’t get that in my bedroom!

But now I’m cold in the shade. 😦 FFS. I think if I want to be out here I need to read a book instead!

P.S I went inside to finish this because the laptop could not cope. 😦